C3: An Interview with the Director

Circle City Chorale is nearly ready to bring you its latest iteration and its newest spring season ever. I sat down with their choral director, Angela Rosser, before one of the weekly Monday rehearsals.

There is something special about this group. Through seven seasons they retain the same fresh enthusiasm of a brand new choir, the lasting flame of camaraderie that occurs naturally with shared musical performance, and the constant thirst for growth and improvement.

Mrs. Rosser shared her thoughts on Circle City Chorale’s motivational drive, her repertoire process, a sneak peek at their next Spring Concert, and through a language as universal as music, how they share a message of hope and unity in the world.

Erick Lange: What influenced your song choices for this spring’s repertoire?

Anji Rosser: Generally, it’s the most exciting and challenging process for me to pick repertoire each season. There is so much incredible music out there! I start with listening to what’s recently published. I go through databases that will tell me what is new on the market and I’ll listen. If I am moved immediately I save that file. So, the process starts with a hundred fifty to two hundred songs that I’ve not listened to fully, then I start to whittle it down. And I’m pretty certain where I am emotionally at that point – whether it’s what’s going on in the world, concerns, issues and challenges that are global, or something affecting me personally. [The music] will speak to me in different ways for different reasons.

EL: But we’re never too political.

AR: Never too political! But there are things that certainly stand out that make me want to take a stand. 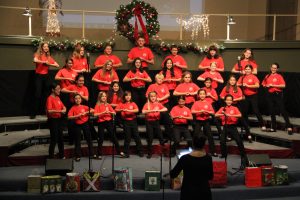 AR: Yes. And this season, in particular, looking at some of the challenges we are faced with, changes we need to make, [things] we need to stand up for without being too political. Effectively, I have the kids singing a song called “Changes”. Got to make some changes in the world today. Too many people are crying, dying… We’ve gotta make a move. And initially I scrapped the song. Then I thought, they’re not too young to sing this. And it was written for a children’s choir.

Overall, I go from quite a large selection to something manageable like twenty to thirty songs that are new, another ten or fifteen that are repeats and then I gel that list together and hopefully it strikes me. I end up, as you know, taking things out. This season I tried not to overload us, so we have fewer songs and a shorter set list. It’s always a challenge and I hope there is something in there for everyone each time.

EL: Which song serves as this season’s anthem?

AR: Ubuntu. I love the song. I love the message. And immediately knew I wanted to close with it. Even before I’d finished the song selection. The concept of us being human, but needing one another to flourish couldn’t have been a better message. That’s a universal message!

EL: What is new this year as far as the repertoire? What songs have our audience never heard before?

AR: Across the three choirs I have twenty-six songs. Fifteen of the twenty-six are newly published. Some will be familiar, for example, “America the Beautiful”, but it’s a new arrangement. The others were written, for the most part, this last year. I think that’s a pretty good mix.

“Oh Give Me Your Hand” has a great message. It’s prayerful. I think that can touch people even if they don’t know the song. 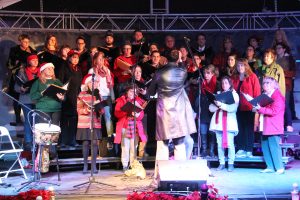 Some of the songs we are repeating like “Over the Rainbow” and “Earth Song” will be somewhat familiar. “Danny Boy” is a new arrangement, but people will recognize the song.

EL: Are there any new exciting developments in Circle City Chorale that we can expect this upcoming season?

AR: We’re breaking for summer somewhat. We’ll perform for the Fourth of July Parade. We’ll do our Broadway Concert that we typically do. We’ll start up again full-speed ahead in August for those who want to sing for the summer. Then we’ll start the season at the end of August.

I don’t anticipate huge changes in structure, although, I really want to continue with workshops, continue with raising the bar and the standard for the group. I want to improve our skill set whether it’s in reading or the physical function of singing – just taking that next step. We’ve gone from a relatively small choir that was not auditioned, which had twenty or so voices and one choir, to now over a hundred voices and three choirs. I think after seven years we’re at a point where we need to aggressively move forward and take that next step. That’s my goal – to improve all three groups: the kid’s choir, ensemble, and certainly C3. Balance out the numbers a little bit. I’m not looking to be a mass choir, but there is room for us to improve always and I’m hopeful everybody’s on board with that.

EL: What drives the choir’s constant development? What keeps each season fresh and new?

AR: It’s a new group… Well, it is and it isn’t a new group. We always have our core group, which is phenomenal, because on one hand you flourish and are successful when you have a group that performs and stays together – you get to know one another, the balance, the blend; we are a cohesive unit and we move forward. On the flip side, we do have new voices coming in and very talented people that somewhat change the dynamic of the choir and that makes it exciting. Right now, we are [an audition choir] so we have people who potentially have more training and want more of a challenge and as we have people come into the group, it gives me the opportunity to push us a little bit…

EL: Well, we have two weeks before our concert now.

EL: We tend to pull it together as much as we can at the end.

AR: We do. I think it would help my sanity if we pulled it together a little sooner, but…

AR: Yes. More songs. Memorizing them earlier. Not tremendous choreography, but the energy the group has when we’re “off-book” so to speak is night and day. The connection we make with the audience is tremendous! And I would love to do a whole concert without music. That might be pushing it, at least in the immediate future, but it’s still helpful and the more comfortable we are with the music and the more the audience sees everybody’s shining faces the better! So, this is a good start. I think we have five songs from memory this round out of fourteen. That’s not bad. The kids are doing all of theirs from memory and ensemble is doing all of theirs from memory. A good portion of our concert will be without music.

EL: Thank you, Anji, for taking the time to have this interview!

Circle City Chorale (C3) and Circle City Children’s Choir (C4) will be performing our annual spring concert, Unity In Song, May 20, 2017 at 2pm and 7pm. Presale tickets are $12 for adults, $8 for children. For more information, please visit our website at www.circlecitychorale.org